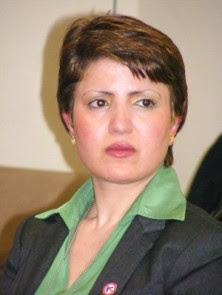 On October 22, 2007 she traveled to New York City on an invitation by the IANSA (The International Action Network on Small Arms) to be present at the United Nation’s General Assembly as Defend International’s representative. IANSA is a global movement against the misuse of small arms and light weapons. As the representative of DI and a human rights defender she is committed to making our world a better place from the abuse of small arm.
Posted by Rejiyan Akrayi at 8:58 PM

Bravo! Thank you for your hard work and humanity! Biji Kurd û Kurdistan