Adela Khanum-Princess of the Brave 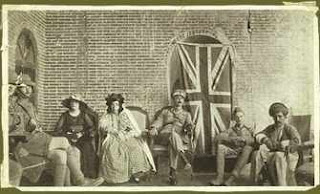 While it is true that men were the leaders of most Kurdish tribes, this does not mean that Kurdish women did not participate in the concerns of their kin. In fact, several cases exist of Kurdish women successfully running the affairs of their clans. Perhaps one of the most well known of these women is Adela Khanum.

According to Hubbard's book From the Gulf to Ararat, Adela Khanum was born in 1847 to a leading family in the former principality of Ardalan, the major center of Kurdish culture in what is now Eastern Kurdistan. She later married a chief of the Jaf tribe, Osman Pasha, whose headquarters was in Halabje. He was appointed the kaimakam of Shehrezur, which led to his absence for a large part of the year, thus allowing Adela Khanum to take over. She not only managed her own and her husband's private concerns, but "ran" Halabje as well.

Major Soane from Britain, who lived in disguise as a merchant of Shiraz among the Southern Kurds during this time, went to her house and explained that, "Lady Adela consolidated her own power, that the Pasha, when he was at Halabje, spent his time smoking a water pipe...while his wife ruled." Her personality and physical features are of such interest, that I cannot refrain from quoting Major Soane's account of his first encounter with her. The following is what he had to say:

"The first glance told her pure Kurdish origin. A narrow, oval face, rather large mouth, small black and shining eyes, a narrow, slightly aquiline hooked nose, were the signs of it; and her thinness in perfect keeping with the habit of the Kurdish form, which never grows fat...The firmness of every line on her face was not hidden, from the eyes that looked out to the hard mouth and chin…Her tones were peculiar, not those of a woman, and though not deep, were clear and decisive, and abrupt."

Further accounts of Adela Khanum and the Jaf women in Soane’s book To Mesopotamia and Kurdistan, in Disguise, 1912, are as follows:

“Her servants were all Persian subjects, and in Halabja she instituted in her new houses a little colony of Persian Kurds, and opened her door to all travelers from and to that country, and kept continual communications with Sina, five days’ journey away.”

"The Jaff women contributed richly to Kurdish poetry, heritage, and culture taking big steps in this regard; and some were like stars shining in Kurdish literature, matching their fellowmen and playing vital part in the expansion of the heritage and art, and also in the social and political sphere. “

Obviously, they were women of immense capabilities.

At the beginning of the 20th century, many British soldiers were present in Halabje. During the war of 1914-18, Adela Khanum rose to distinction for saving the lives of several British soldiers. She so fascinated her British overlords, that they granted her the title Khan Bahadur, Princess of the Brave

Among her achievements in Halabje was the building of a new prison, the institution of a court of justice (in which she presided as president), the construction of several fine houses, and an impressive bazaar.

She continued to exercise her influence through her son, Ahmad Beg, until her death in 1924.

You might be interested to know that the great Orientalist Vladimir Minorsky met her in 1913 as he says in Minorsky, V. 1945. The tribes of western Iran. The Journal of the Royal Anthropological Institute of Great Britain and Ireland 75: 73-80.