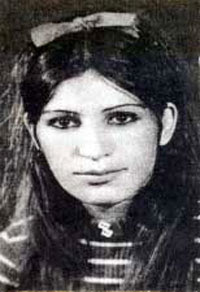 During a period in history when society was not acceptant toward women entering the political arena Leyla Qasim dared to play an active role not just in politics but in Kurdish politics. Leyla Qasim, was born in 1952 to her father Dalaho Qasim and her mother Kani in the Kurdish city of Xaneqin to a very patriotic family. Leyla was one of five children and the only girl in the family. Her brothers, Sebih, Selam, Sefa and Selah along with Leyla were very dedicated to their education. In 1958, Leyla started her first year in primary school and finished secondary school in Xaneqin.

Despite the fact that Leyla was very young, she was very determined and motivated to work for an independent Kurdistan and believed in the power of young Kurdish women and men. In 1970, she joined Kurdistan Democratic Party. A year later she started her studies in sociology at the University of Baghdad. In 1972 she became an active member of Kurdistan Student Union (Yekiti Qotabi yen Kurdistane). Through KSU is where she met her compatible companion, Cewad Hemewendi. Like Leyla, he was a strong activist for the freedom of Kurds and an independent Kurdistan. Beyond their love for each other they had a second powerful love, the love of their homeland; Kurdistan. In a time when most were executed to express freely their love for their country, Leyla not only openly expressed her love for Kurdistan but she also proved to many that even women can join the political arena with men and work hand in hand to liberate Kurdistan.

On April 28, 1974, Leyla along with four of her friends (Hesen heme Reshid, Neriman Fuad, Azad Sileman Miran and Cewad Hemewendi) were imprisoned by the unfair Iraqi regime. Despite the fact that Leyla and her friends were nothing but symbols of freedom and peace, they had become victims of the unlawful Ba'ath party. Even during when the smallest move was under scrutiny by the Iraqi regime Leyla showed absolute courage in front of government officials when questioned. It is said that during her hearing in front of the Ba’ath judge, Leyla with a loud brave voice said:
“Kill me! But you must also know that after my death thousands of Kurd will wake up from their deep sleep. I am happy that I will die with pride and for an independent Kurdistan!”
Her heroism and brave spirit was an absolute threat to the Ba’ath regime for she was perceived to make a great impact on Kurdish students and Kurdish women and support them to become active figures of Kurdish politics. As a result, in a very short period of 14 – 15 days Leyla in the company of her friend was sentenced to death. Unfortunately, on May 12, 1974 at 7 in the morning Leyla and her friends were executed and added to the list of the Kurdish martyrs. Her death ignited the Kurdish fire in the hearts of her fellow Kurds and especially the Kurdish students who attended her University. In addition, many of the students soon after joined the Kurdish Peshmerge forces to continue to fight for the struggle that Leyla dedicated her life to.
Leyla’s close family and friends described her as a fearless, intelligent, devoted, soft spoken, sweet Kurdish girl, which is how she will be remembered.
Posted by Rejiyan Akrayi at 10:24 AM

I just want to ensure that history is close to the truth if not 100% true. In a book by M. Brazani (current president of KRG) he write about a KDP cell that was exposed by a traitor working for Iraqi intelligence service. Leyla Qasim was a member of the cell. The person who exposed the cell currently lives in Erbil with full knowledge of the President of KRG. hint the traitor was arrest in Syria and found guilty for being with Iraqi Baathist regime.